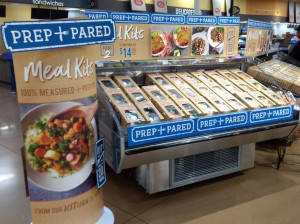 The online meal kit industry has been declining the last couple of years, with companies struggling to meet revenue and subscription goals, but it seems that big grocery might be able to turn things around.

A new Nielson report shows that meal kits sold in grocery stores now account for 60 percent of all meal kit user growth, a boon for services like Blue Apron that have been struggling with declining subscriptions.

According to Neilson and published in trade magazine Grocery Dive, 14.3 million households purchased meal kits in the last half of 2018, up 3.8 million households from 2017, which shows that there is still interest in online purchasing. The grocery business however is booming, with in-store sales totaling $93 million in 2018.

In a survey of 120 million households, Neilsen found that in 2017, 67 percent of consumers purchased their meal kits exclusively online while 30 percent bought kits at their local grocery chains. In 2018 however, online-only purchasers fell to 60 percent while grocery store purchasers rose to 32 percent. The percentage of customers who have bought both online and from grocery stores rose from 3 percent in 2017 to 8 percent in 2018.

This shift shows that a growing number of consumers are interested in the convenience and ease of meal kits but prefer not to be locked into a subscription. Having kits available at grocery stores means that consumers can also purchase a kit immediately when they want it.

The big grocers saw the potential of meal kits in the last few years, even as the online subscriptions were declining. Blue Apron struggled after its lackluster IPO, which debuted shortly after Amazon announced it had acquired Whole Foods. But in the last year the company has seen a resurgence thanks to grocery store sales.

Kroger’s acquired Home Chef and Albertson’s began to offer meal kits from Plated. Gelson’s is planning to once again offer the more upscale meal kits from Chef’d as a kind of reboot of the meal kit brand after Chef’d ceased operations in 2018.

Shares of Blue Apron are still falling, but the company is trying new ways to reach customers in light of the shifting market. After reducing marketing spend over the last year, the company has been focused on its in-store offerings, including bundles of sauces, grains and spices to pair with fish or meat. They have also recently partnered with FitBit to be part of its new rewards program. When FitBit users meet their fitness goals, they can take advantage of offerings like discounts on meal kits.

The meal kit industry continues to change rapidly, along with consumer demand for how and when they want to purchase.

We have 36 guests and no members online