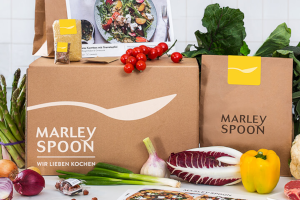 Marley Spoon provides a similar experience to Blue Apron and Hello Fresh, offering recipes and pre-selected ingredients that can be ordered online and delivered to your door. Marley Spoon recently partnered with Marth Stewart under the Martha & Marley Spoon brand, and has also put money behind marketing efforts to gain a bigger share of the US market. In addition, the company launched a cheaper mass market meal kit service called Dinnerly to appeal to a broader range of customers.

But the trend of meal kit services is changing, and companies are looking for new distribution methods outside of online sales. Marley Spoon’s IPO comes days after Hello Fresh announced that its meal kits will be available in almost 600 Giant Food Stop & Shop stores, the largest launch of pre-portioned meal kits in stores.

Marley Spoon is still well behind its biggest competition, including Hello Fresh. Marley Spoon has 110,000 active customers across Australia, the U.S., Austria, Belgium, Germany, and the Netherlands, which is about a tenth the size of HelloFresh in the U.S. Its 2018 forecast revenue is 93 million Euros.

CEO Fabian Siegel told TechCrunch that he wasn’t interested in more venture capital funding, that he saw going public as a better long-term move for the company. Still, the majority of the company (66%) remains private, which means management will still be making decisions and retaining control.

Siegel also maintains that the growth of the online grocery industry is driving their marketing and distribution strategy. He is going against other industry players by looking at the long game instead of just increasing customer acquisition right now. He feels that the meal kit market will grow along with online grocery sales.

So far, grocery stores are still major players and are eager to be part of the meal kit industry, growing their offline business as well as in-store sales. As customer preferences change, it seems flexibility might be the key to success.

We have 91 guests and no members online

EzContacts
1.2
TK Tyson Kennemer
" They won't exchange defective product that they send you..."
AncestryDNA
0.5
C ceedubbya62
" Bought this kit, had it sent and ATTEMPTED to..."
WW (Weight Watchers)
2.6
M MeganS
" The new Weight Watchers app and program is very..."